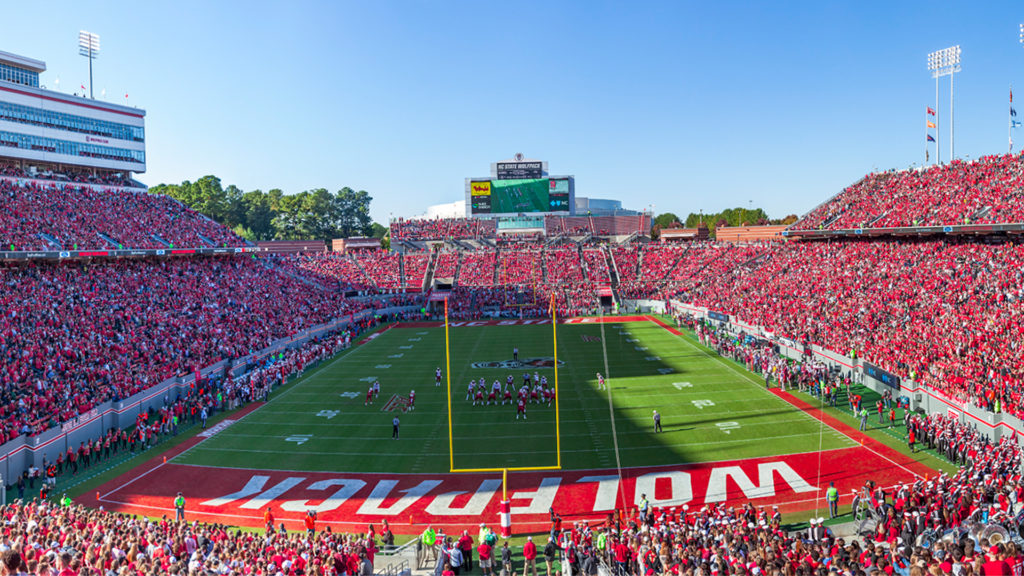 Located in Raleigh, North Carolina, Wayne Day Family Field at Carter–Finley Stadium is home to the NC State Wolfpack football team. While located on the North Carolina State University land, the stadium is a few miles to the west of the academic campus on Trinity Road, just off Hillsborough Street.

As early as the 1950s, State was looking to replace its on-campus facility, Riddick Stadium that was aging pretty drastically. Also, the stadium never held more than 23,000 seats (14,000 permanent) at any time. Thus, many of longtime coach Earle Edwards’ teams played more games on the road than at home. At Coach Edwards’ urging, NCSU officials began a more concerted effort to build a better and more modern facility.

Through Martin’s diligent efforts and the support of the Wolfpack Club, nearly half of the $3.7 million needed for construction was raised quickly through private donations. Some 3,000 fans and alumni donated at least $75 per person to make the stadium a reality. Each of them is recognized in the dedication program. Where else, the other half was financed by the issuance of a 40-year public bond.

The location selected for the stadium site was a 75-acre tract of land owned by the university adjacent to the North Carolina State Fairgrounds. A lake that had been as a research fish hatchery was drained to help create the bowl of the stadium. Also, fields of alfalfa hay and corn were plowed under, cleared and leveled to create the expansive parking lots.

The design engineer for the stadium was State College graduate and former civil engineering instructor L.E. Wooten. He also owned one of Raleigh’s biggest engineering firm. Wooten hired NC State design professor Charles H. Kahn as the primary designer. He also hired Milton Small and Associates as the construction contractor for the new stadium. The erector-set stadium went up at a fast pace, as each of the 16 of the pre-stressed concrete support beams for the upper decks poured on site and the bleacher supports being trucked in from Durham.

The stadium opened on Oct. 8, 1966, when the Wolfpack hosted South Carolina for Dedication Day. Sadly, the crowd went home disappointed following a 34-24 loss to a Gamecock team that won only once all season. Ultimately, Carter Stadium still fulfilled Edwards’ dream, even though the first season had an average attendance of slightly over 25,500, which was not much more than the final season at the old Riddick Stadium.

The stadium was originally named Carter Stadium, in honor of Harry C. & Wilbert J. “Nick” Carter. They were major contributors to the original building of the stadium. The pair were graduates from Wallace, N.C. who were successful textile manufacturers. They took a little over 22 months, much quicker than the drawn-out process needed to complete Reynolds Coliseum.

Less than 10 months before construction was completed, Raleigh philanthropist A.E. Finley and Associates donated $290,000 to finance a fieldhouse in the north end zone, with locker room facilities for two 55-player teams. The name Finley was added to the stadium’s name in September 1979, making its name today.

The current seating capacity of the stadium is at 57,583 seats, although the original capacity was a mere 40,000 seats. Additionally, Carter–Finley Stadium’s season tickets have been sold out for nine straight years since NC State’s head coach, Lou Holtz arrived in 1972. Edwards got the place built, but the success that followed under Holtz and Bo Rein paid for it.

Prior to the 2001 season, the university began a program of modernization of the stadium by enclosing the southern end zone with seats and other more improvements. The state-of-the-art Murphy Center (named for Wendell Murphy) was built behind it too. The 103,254 square-foot Murphy Center is unequaled in its design for the training and preparation of athletes.

Following the 2004 football season, Carter–Finley has again expanded with the completion of the “Vaughn Towers”. The new tower is a four-level facility that boasts 117,000 square feet, holds 51 luxury suites, 1,000 club seats and luxurious quarters for the media covering NC State games.

For the 2006 season, a new north end zone grandstand was added consisting of 5,730 new chairbacks, bench, and handicap-accessible seating with another 1,630 permanent bleacher seats built underneath the video scoreboard making Carter–Finley a bowl and giving it its current seating capacity. Additional upgrades to the stadium included a new north end zone plaza with concession stands and the addition of two video screens in each corner of the south end zone.

The Wolfpack squad practices just a stone’s throw away at the Dail Practice Complex. This area covers seven acres and boasts three full fields, a training room, restrooms and a tower where the head coach is frequently found surveying his squad.

Other than being a football stadium, Carter-Finley Stadium has also hosted a number of concerts and the 2011 World Football Challenge exhibition match. Some of the concerts are held by the below singers/bands and the year of their concerts:

Ticket Policies:
Find out more about our ticket guarantee and other ticket policies.